The Changing Geography of the Opioid Crisis 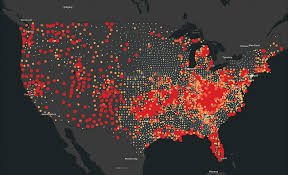 In contrast to previous deadly drug epidemics like the heroin crisis of the 1970s, which was highly concentrated in cities and urban areas, opioids have affected rural areas the most: Over the past two decades, deaths from opioid overdoses have climbed by more than 700 percent in smaller rural areas, versus less than 400 percent in cities and metropolitan areas. But this geography appears to be reversing as deaths from synthetic opioids like fentanyl have climbed rapidly in cities and metros. Such deaths are expected to soon eclipse deaths from opioid overdose in rural, non-metro areas.

A recent study by a team of researchers at Syracuse University, the University of Iowa, and Iowa State University take a deep dive into the changing geography of the opioid crisis. Published in the journal Rural Sociology, it tracks opioid deaths in the more than 3,000 counties that make up the 48 contiguous U.S. states. And, using data from the U.S. Department of Health & Human Services’ CDC (Centers for Disease Control and Prevention), it breaks out these deaths from distinct types of opioids: heroin and opium, prescription opioids like methadone, synthetic opioids or unknown narcotics, and so-called multiple-cause deaths from two or more opioids.

The study finds that the opioid crisis takes different forms in urban and rural America. While the urban opioid crisis is a crisis of heroin and illegal drugs, the rural opioid crisis of prescription drugs is largely a story of growing spatial inequality and of places left behind, most often occurring, as the authors note, in places that tend to have a declining industrial base.

The early years of the opioid crisis largely involved prescription drugs. This was primarily a rural crisis: More than half (55 percent) of the 275 counties noted on the 1999-2001 map are rural and another 20 percent are micropolitan.

The second wave involved heroin. This crisis is more urban, with metros having consistently higher death rates than rural or non-metropolitan areas.

The third wave of the opioid crisis is synthetic opioids. This, too, is more of an urban crisis, with death rates being highest in large metro areas and micropolitan areas, and lowest in rural areas.