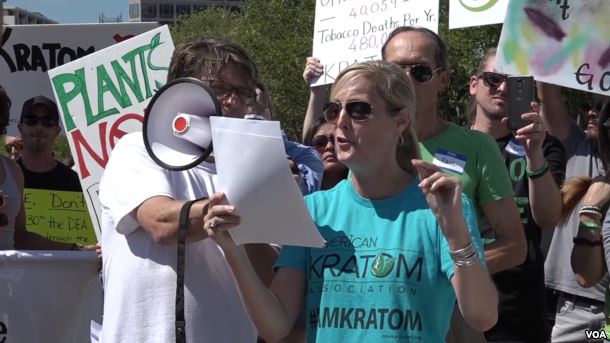 Demonstrators gathered Tuesday outside the White House to demand that a natural product from Southeast Asia called kratom be kept legal in the United States.

The U.S. Centers for Disease Control and Prevention and the U.S. Drug Enforcement Administration have cited an increasing incidence of kratom abuse, and the DEA has announced it will be listed along with heroin and other dangerous drugs on its Schedule I list of illegal substances by the end of this month.

The DEA’s announcement said kratom “has no currently accepted medical use in treatment in the United States, and has a lack of accepted safety for use under medical supervision.”

“Chris Kratom” and Susan Ash, both of whom attended the rally in Washington, favor further study of kratom and hope it will eventually be made legal under the same regulations and consumer protections that govern other products.